Thoughts On the Run--Have An Attitude of Gratitude 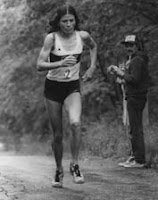 I believe it was Dr George Sheehan who once wrote,"I do my best thinking while out on a run." What follows are some thoughts that came into my mind recently during the course of a workout. If you haven't considered what you are about to read, take a few moments when you have time and do so.
Be thankful: Be thankful that you have the ways,means,time and health to indulge in the purest of all sports,running. More people than we can imagine don't.
Don't take things for granted:I know people don't like to read this but we are an accident or diagnosis away from losing it all, each day is a gift,make the most of it. People should remind themselves of this daily,I know I need to.
Don't put off tomorrow what you should begin today: I can't tell you how many people I've known who've had big running plans and said they were going to start on them as soon as they did this,or got finished with that. Guess what? Tomorrow never came. I've said this before,it's not a good feeling when you realize you should have gone for it years back when you were able to.
Be your own boss: You're the one who is in charge of your destiny. You're the one who has to answer for the mistakes you make as well as take credit for what you do right.So why do some of you allow others to dictate to you as to how you should live and determine as to whether or not what you do is worthy or not? I will quickly add that what I say is not advocating being selfish and insensitive to others.The reality is, it's your life,be in control of it.
Don't abuse yourself: too many people drink too much alcohol,eat too much, as well as eat too much crappy,unhealthy food. One of the biggest fallacies in the athletic world is that because you train,you have a free pass to do eat and drink whatever you want. If you believe that and do it year in and year out, you will eventually have to "pay the piper" somewhere down the line.
Posted by Dave at 4:32 PM