The Winning and Losing Aspects of Running 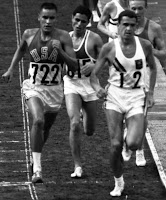 With running and racing, we should understand that there is more to winning and losing than where you place when you cross the finish line. Alot of it has to do with how you view your whole running experience.The following is by Joe Henderson and was written sometime in the 70's. He brings up a few points worth considering,things that we tend to take for granted.I add a few comments after some of his quotes.

"Winning is realizing you have already won something by being in the running." You especially notice this as you get older, you'll see you are in an ever shrinking minority of people who continue to get out there everyday and train(run).Hopefully, you'll realize how fortunate you are to not only be a part of this great sport, but still have the desire and ability to run. Most fall away for various reasons as the decades pass. "Losing is not starting,but being content to talk about what might be or might have been if......" Amen to that Joe. Add to that this one, losing is giving up running for all the wrong reasons,like you got lazy,or, having lots of "things" became more important than "the run." Joe continues with: "Winning is standing on the shoulders of the giants. It is absorbing the written and spoken lessons of people who've run before." Ah,those great running bios and training books from many years past,treasures for those who live for the run.They no longer publish books like these but at least we have them to guide and inspire us. "Losing is refusing to help other runners." So true,how can anyone who says they love this sport not want to help the newbie? I am deeply indebted to those who took the time when I needed some solid advice and direction(special thanks here to Arthur and Ralph).There is an altruism to this sport that is unique. "Winning is continuing to run after fate has decided that you are past your prime and will never again break a personal record. It is continuing when there are no races left to run." I was always bewildered by those who quit after the pr's stopped,and believe me,there were many runners I knew who did. I always wanted to go up to them and ask: "Is that all running meant to you was setting a p.r.(personal record)?" I go along with what the great Jack Foster said in the later years of his running career: "I feel I'm running as fast as I ever did as long as I don't look at my watch." "Losing is living in the past. It is trying to restore the old glories to the condition they were in during their short life." The danger in competition is in letting your ego become a factor,allowing it to define who you are as a runner by how you finish or by what your time is. Forget your ego! Ultimately,it's all about the run and the feeling you get when you are out there.
Posted by Dave at 6:41 PM