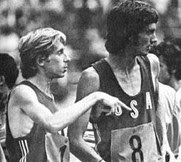 The mind and the marathon;controlling your emotions and anxiety is critical to racing that distance well. Don Kardong offers a technique you may want to consider in the future if you have had troubles in those areas in the past. Kardong,an excellent distance runner and writer, finished fourth in the marathon at the 1976 Olympics.Sadly, he was denied a bronze medal because the winner in '76 was  years later found to be a "druggie." Consider the following:
"I have a theory on marathon running,where a rational approach is so important.During the first ten miles of the race,I try to disasociate myself from what I am doing.I talk,joke and daydream in ways that remove me from the race. But after 10 miles,my consciousness re-enters the picture,and concentration begins.From that point on,the problem is concentration,and the feeling is one of acute association with the task at hand.I switch from automatic pilot to manual control,and through the last part of the race I pick off those people who have over-associated,i.e.,who have tried to concentrate from the start.The people who disassociate(daydream) the whole way are never in the race.I believe the combination of passive with active running is the most effective mental condition for marathoning."
As one who has been guilty of "over-associating" in marathons in the past, what Kardong says makes sense.I recall being on what he describes as "manual control",being too preoccupied with how I'm feeling right from the start of the race, in the state of potential panic where I interpret something going on with me physically as being potentially disastrous.It's exhausting physically and emotionally.
Posted by Dave at 7:56 PM