Some Thoughts on Racing: Before,During and After 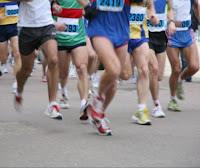 I went to see a friend compete in a 5k road race recently. As I watched it I got to thinking how little has changed over the years in regards to the way most people approach racing. What follows are some thoughts on things pertaining to the time before, during and after a race.To begin: I overheard a few runners discussing what they had eaten that morning,as if it was an essential part of their pre-race preparation. I tend to go along with what many have found,that at least in the shorter distances, outside of water,juice or some electrolyte type drink,the less in your stomach the better. A good meal the night before a race will work just fine. For those who absolutely must eat something, I've found having a Powerbar with fluids works great. Obviously,if you are running long races, consideration as to what you consume before a race will be different. I also noticed that alot of people do some rather elaborate stretching routines before racing. If this is what you need and it works for you then I say that's what you should continue to do. Personally,I think that the necessity of stretching has been overplayed in recent decades. I believe how much one needs to stretch depends on the individual.The inference in many articles on stretching is that if you don't do it you are just asking for problems down the road.What's worked for many is a little walking around,then some easy jogging followed by a few basic stretches and then finishing with a little more jogging.Another thing, keep the race in its proper perspective. It's a road race, there's one every single weekend somewhere near you so don't allow yourself to get "worked up" about performance and expectations.If you don't hit the time you want then a week later you can go at it again. Stay calm and relaxed before a race. Now the race itself: while I was watching this race I noticed that the majority of people were going out way too fast which has always been the norm at road races. Except for the very fit,you will pay dearly for doing this later in the race. Again,the necessity of staying calm at the start line is essential. Begin the race in control,unless you are one of the "studs" up front,realize that everyone around you will be going out too fast.You have to control your adrenaline and pre-race anxiety. Understand that when you see people charging out ahead of you at the beginning of a race that you'll be seeing them later. There is nothing worse than planning to run 6:30 miles and then cruising through mile one in 5:25. As a runner once told me after I went out way too fast and crashed in the last several miles, "you run using this(pointing to his head) as well as your legs." Also, people tend to lose form during a race as they become tired. It is absolutely necessary to remind yourself to keep your arms and shoulders relaxed. I repeatedly tell myself to "drop" my shoulders and relax as I near the end of a race. We've all seen the runners who are clenching their fists with their shoulders kind of scrunched up as they are in the final part of a race. One last thing in respect to racing,when you are starting to feel spent,this is the time to go to your arms,use them,keep the shoulders relaxed but start moving the arms more, even if it feels a little exaggerated. Too many runners don't recognize the neccessity of using their arms while running, especially during races and when going up hills. A forgotten factor in racing is that runners should be thinking about more than just how much longer it is till they're done.Monitor and evaluate yourself as you go. After the race: walk around a little while drinking lots of water,then do a very easy warm down jog followed by some basic stretches and some more walking.This goes a long way towards preventing day after soreness and stiffness. Now,at this time, I reach for the yogurt which seems to be at every race I've ever been to, then I go to my favorite spot at the road races,the beer tent. Since beer acts more as a diuretic than a fluid replenisher,proper hydration before you hit the tent is essential. Finally,as you are kicking back thinking about the race,consider what you did right and what you did wrong during it, make a mental note to change the things that need to be changed. Appreciate the fact that you can race and have the ability to change.