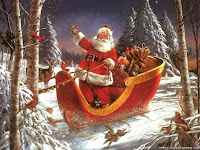 Christmas is a special time of year for many reasons and gift giving and receiving have alot to do with why it is so special.
For me, getting gifts at Christmas brings back memories from years ago when it was a simpler less complicated time.
What follows is my Christmas wish list,emphasis here is on wish,but hey,there's nothing wrong with wishing.
1.How 'bout an English language version of Yiannis Kouros' book he wrote years ago that chronicles his remarkable 6 Day Race in New York City. Against all odds and at one point,horrible weather,Yiannis set a record for that distamce. Are there still some hardcore runners out there who don't know he is? He is in my opinion the greatest runner who has ever lived. He owns every point to point ultra record as well as every one from 24 hours to 6 days. Consider 303km for 24 hours for starters.Break it down and see how many miles that is in a day. Go to Wikipedia and take a moment to read over the records he has set and the prestigious Ultra races he has won. Google Yiannis and read some of the accounts of his races. Yet this man can't get his book published? I mean they're publishing Dean K's books,why not Yiannis'? If you have not seen the documentary on Yiannis entitled,'Forever Running', you really need to buy it,today! This man is one of a kind,unlike any runner you have ever read about or seen. Last time I looked the site Zombierunner was selling the DVD.Oh yeah,Chris McD., I'm still waiting for that story you told me you were going to do on him.
2.I'm showing my age here,how about more marathons with fewer entrants,say 200 or 300? I'm tired of the congestion and confusion that comes with the thousand plus marathons.Making your way through a sea of people every which way you turn and go,waiting in lines for most everything and running for several minutes before you pass the starting line gets old quick.You younger runners may have never experienced the calm and lack of confusion that accompanies the smaller marathons.
3.I'd like cheaper running shoes. I think I'm finally a believer in the recommendation that you need a new pair every four months but,come on,100 plus dollars for new ones? Despite marketing research to the contrary, I still don't believe the majority of runners can easily afford the cost of  changing out shoes every 4 months.
4.I want a running magazine that is like the way Runner's World and Running Times were in the 70's.They were performance oriented,maximum performance oriented magazines. They had quality interviews with great runners,people like Lydiard,Clayton and Sheehan were doing monthly columns.Yeah,I understand that magazines have to reach the biggest audience to survive but this is a wish list isn't it?
5.I want a charismatic American runner like Steve Prefontaine to arrive on the scene,someone to get this country interested in distance running again,especially the young kids. As Dick Kendall once told me,if the sport doesn't involve hiting,catching,dribbling or throwing a ball, the people aren't going to be much interested in it.
6.An injury free year.A year where I can move up the mileage, and at times the intensity,and not have my body rebel.
7.One more great racing season,heck,give me one more truly great race and I'll be happy,I shouldn't be greedy.
So there you have it, my Christmas list,what's yours like? Feel free to send some of yours along to the comments section at the bottom of today's article, I'd love to read them.